7 sips of coffee: Juliet Corson and the French methods 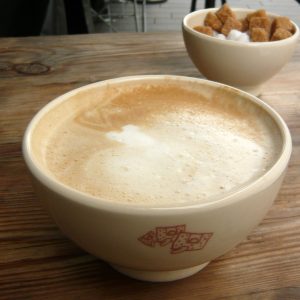 This is the fourth of seven guest blog posts about coffee. Baristador Coffee does not necessarily endorse the coffee making methods below, but does endorse Ms Corson’s sentiments. Many thanks to Project Gutenberg for making this guest blogging series possible.

That “the easiest way is the best” is a proverb not always verified in the kitchen; but it certainly applies to the making of good coffee, if the ideal beverage is a clear, wine-brown, fragrant fluid of comforting quality. Testing many ways of preparing this almost indispensable accompaniment to a good breakfast has proven that the Turks and Arabians treat it most fairly; the reservation may be made that Americans generally prefer not to absorb the substance of the berry, even in the form of an almost impalpable powder, as do the followers of Mahomet. These comparatively temperate people attach its true value to coffee as a frequent beverage; its free use is unfavorable to indulgence in intoxicants of any character, and, properly prepared, it does not exercise any deleterious action upon the digestive organs under normal conditions. Some persons are unable to use it freely without more or less intestinal disturbance, just as others cannot digest eggs, fish, or milk; once convinced of its injurious effect, one would be as foolish to drink it as to persist in testing the relative hardness of one’s head and a stone wall.

Much of the physical trouble arising from the drinking of coffee is to be attributed to the use of uncooked milk with boiled coffee. The actual boiling of coffee extracts its tannic acid, and this, combining with some of the component parts of milk, forms an indigestible substance that appears on the surface of the beverage in the form of a thin scum. When coffee disagrees with any one who likes it boiled, the trial is suggested of making it with boiled milk, as the French prepare café au lait; if the ill effect is still apparent, dispense with milk, using only sugar; or try condensed milk, in which the elements are somewhat changed chemically; if it still produces disturbance, be sensible; do not use it. Cocoa is a good breakfast drink.

Coffee is preferable to any kind of tea as a breakfast beverage, because, under right conditions, it does not, like tea, retard the digestion and assimilation of food; it is slightly stimulating and conducive to appetite, and is especially valuable when the bulk of the meal is made up of cold food, as it sometimes is in summer, and when it is hurriedly prepared. Several recipes are given for making coffee, with preference for the last, because it develops all the flavor and aroma of the berry, and secures its nutrient properties so far as they can be obtained by infusion.

Of making breakfast coffee was to mix a cupful of the ground berry with one raw egg and its shell, and a quart of cold water; these ingredients were placed in the coffee-pot over the fire, occasionally stirred, and allowed to reach the boiling-point; the coffee-pot was then drawn to the side of the fire, where it could not boil, one-half cupful of cold water was poured into the spout and top of the pot, and the coffee was allowed to stand ten minutes before it was used. Boiled milk is the best for all kinds of coffee except café noir.

A favorite French mixture of coffees is one-third each of Java, Mocha, and Maracaibo, with at least an ounce of pure chicory to each pound of coffee. The addition of chicory to coffee gives it a rich color and pleasant flavor; it is best to make the mixture at home, buying the chicory from some reliable dealer.

Green coffee—that is, unroasted coffee in the bean—may be bought at any time when the market is favorable; it improves by being kept in a cool, dry place. Roast it in small quantities, and grind it just before using it; this is quite feasible, even if home facilities are limited. In some households there are small coffee-furnaces; or the beans can be browned in the oven by exercising due care. Add a very little good butter to the coffee, just enough to make it glossy, but not greasy; after it has been put into an iron pan, place it in the oven, and shake the pan often enough to make the beans brown evenly; do not burn the coffee. The same precautions must be taken in using the furnace or coffee-roaster. If coffee is bought roasted and unground, put into a frying-pan with enough butter to make it glossy, and shake the pan over a hot fire until the aroma of the coffee is perceptible; then grind it, and use it at once. Only enough for one meal should be heated at one time, the quantity depending upon the desired strength of the beverage; from one to two ounces of coffee to a quart of water is the usual allowance in families. When coffee is made in large quantities a pound is allowed for twenty-five persons.

This favorite breakfast beverage of the French is made of café noir and boiling milk in equal quantities, poured together into a cup from two coffee-pots, and sweetened to taste.

This beverage, called after-dinner or black coffee, is made clear and strong, being allowed to reach the boiling-point, but not to boil. The usual proportions are one cupful (or four ounces) of coffee to a quart of water. If made in a percolator, a half additional of this quantity of coffee should be allowed; that is, six ounces to a quart.

When coffee is made in a percolator, or a coffee-pot with a strainer at the top, one-third at least should be added to the usual proportion of coffee; three ounces to a quart makes a good coffee by this method. The coffee is placed in the strainer, and actually boiling water is poured through it; the coffee-pot is placed where the coffee will keep hot without boiling for about ten minutes, and then used.

The best and most economical coffee is made as follows: A small bag of unbleached cloth is so arranged as to remain suspended about midway of the coffee-pot. The coffee, freshly roasted, or heated in a frying-pan, as described above, and then ground to a fine powder, is put into the bag, an ounce being allowed for each quart of coffee; actually boiling water is then poured upon the coffee, and it is allowed to stand for ten minutes where it will keep hot without boiling, and then used with boiling-hot milk and sugar. Of course the coffee-pot must be of such a size that the bag of coffee will be entirely covered with the boiling water.

Coffee made in this way is clear and fragrant, absolutely harmless to the digestive organs, and as delicious as coffee should be. The boiling-hot milk is a necessity for those who like coffee hot. The coffee-pot should be rinsed with clean boiling water after the coffee is used, and then thoroughly dried; the bag should be rinsed in boiling water to free it from grounds, and then dried before it is again put into the coffee-pot. No soap should be used upon it, nor any soapy water; simply water that has been boiled before it is used. If this method is followed, clear coffee will always be the order of the day.

Juliet Corson has devoted herself to study and experiments on healthful and economical cookery, and dietetics, and founded the New York School of Cookery. She has done much to help the poor learn how to cook on tight budgets.