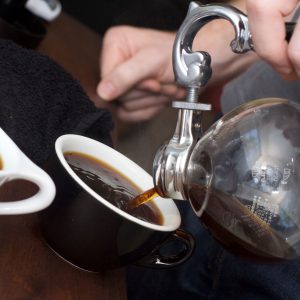 This is the second of seven guest blog posts about coffee. Baristador Coffee does not necessarily endorse the coffee making methods below, but does endorse Ms Harland’s sentiments. Many thanks to Project Gutenberg for making this guest blogging series possible.

The very best way to make coffee is to buy the raw berries and brown them yourself, at least once a week. Most printed directions for preparing the beverage insist upon these preliminaries as a sine qua non. When the mistress cannot superintend the roasting, it is seldom well done, the coffee being burned or unequally cooked. Therefore, the average housewife, who has her hands full of “must-be-dones,” reading that tolerable coffee cannot be had unless this rule be obeyed, makes up her mind to give her family a second-rate article. Should coffee be regarded as a daily necessity of existence by her and her household, she would do well to spare time from other occupations (if possible) to prepare it in the most approved manner.

To this end, purchase Java and Mocha in equal quantities; mix and roast them in a broad dripping-pan, shaking and stirring often, particularly when they begin to brown, turning the pan, end for end, several times during the operation. The berries should be evenly tinted to the shade we know as “coffee-color.” Burnt grains must be thrown away. Lift the pan to a table, and stir into the hot coffee the beaten whites of two eggs for each pound, and a dessertspoonful of fresh butter. This keeps in the aroma until the grinding lets it out. Do it quickly and faithfully, glazing every berry with the air-proof coating. When cool, shake the coffee in a sieve, that the berries may not stick together, and put it into a tight canister. Grind in a good mill—i.e., one that works well without rattling or “wobbling”—every morning as much as will be needed for the day. This was our mothers’ and grandmothers’ way of preparing coffee grains for making the most popular beverage known to civilized peoples, and no domestic considered herself aggrieved if required to do it. Now, the good wife who informs her cook that “we roast and grind our own coffee,” will have trouble in the flesh. Bridget’s impregnable belief is that “what is good enough for people that lives in finer houses nor yerself, is plenty good for yez.” It is not to be undermined by representations that ground coffee bought by the package has lost much of its original value with time, and is, furthermore, shamefully adulterated. What your richer neighbors use ought to satisfy you, especially when discontent with it entails worry and labor upon herself. I repeat it: If you must have irreproachable coffee, look to it in person.

Next to this process in excellence is the plan of purchasing, a pound at a time, freshly-ground coffee from a trustworthy grocer, whose mill goes every day; or you may buy it freshly roasted in the grain from him in small quantities, putting a certain portion in the oven until warmed through, as you need it, and grinding it before it cools. This insures you against the admixture of foreign substances. The belief in the extensive adulteration of the ground coffee sold by the package at a low rate is founded upon a rock of fact. Sacks of beans and tons of chicory are bought without a scruple, and stored unblushingly in the warehouses of coffee and spice millers.

Make sure then, to begin with, that your material is pure and lately ground. On the last point, take notice that the coffee which is to be made into a drink by the percolation of steam or water should be ground more finely than when it is to be boiled.

Use water on the fresh boil

Next see that the water is on what may be called “a fresh boil.” It should not have simmered for hours at the side of the stove until all the liveliness is spent, but stand in the hottest place, where it will come quickly and furiously to the boiling point, then be used at once.

The perfection of coffee, to my way of thinking, is made in the “Vienna coffee-pot.” A tea-kettle of copper, brass, or plated silver, full of boiling water, is set over a spirit lamp. Into it is fitted a tube attached to a glass receptacle for the finely-ground coffee, which is kept from entering the tube by a wire sieve. A tight stopper prevents the escape through the kettle-spout of the steam generated by the lamp. It is thus forced upward through the tube and sieve into the dry coffee. The globe has a brass cover that keeps in the heat. The coffee is speedily saturated with vapor, and begins to heave and boil like the crater of a volcano. When the tossing mass fills the upper vessel, the stopper is withdrawn from the spout of the lower, and the surface slowly sinks to the original level. The stopper is replaced, and another boil begins. Three boils and as many drainings will leave in the kettle delicious black coffee,[14] fragrant and clear. It can be made on the breakfast or dinner-table in five minutes, if the flame be strong and the water on the boil when set over it. Directions and measures for quantities of coffee and water accompany the pot.

Hardly second in merit to this method is the use of the French “biggin” or “grecque.” A tin cylinder, furnished with two movable and one stationary strainers, is set on a coffee-pot. Dry, fine coffee goes into the upper vessel in the proportion of a half-pint cupful to a quart of boiling water poured on this, and left to filter through once, twice, or three times, as a moderately or very strong infusion is desired. The pot should be made hot by scalding before the cylinder is fitted on, then stand on the hot range or hearth, while the liquid drips through the strainers. But this must not boil then or afterwards.

Persons accustomed to Vienna or French coffee do not relish that cooked in the old-fashioned style, but as many still cling to the latter, it is well to know how to obtain the most satisfactory result offered by it.

Allow to each even cupful of ground coffee a quart of boiling water. Mix the coffee in a bowl with half a cupful of cold water and the white and shell of an egg; stir all well together before putting the mixture into the boiler. Add the boiling water, and let it boil fast ten minutes after it begins to bubble. Throw in one-third of a cupful of cold water to check ebullition; draw to one side, and let the decoction settle for three minutes before pouring it off gently from the grounds into the urn.

Send hot milk—cream, if you have it—to table with coffee. A teaspoonful of whipped cream, laid on the surface of each cupful, adds to the elegance of the beverage.