“What beans do you use in Baristador?” goes the common question that people rightfully ask. However, I cannot answer fully because that would be like a chef giving away their secret recipes. So, maybe a little history and a few hints will suffice. 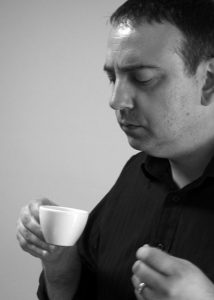 Seeds were planted for the Baristador Blend back in 1992 in Trieste, Italy. In that year I saw two Italian men, impeccably dressed, step up to a coffee bar in Trieste’s main railway station at the harbour, down two small coffees from small cups in two sips, and then continue on their way. That was the first time I witnessed the ritual of espresso. I was entranced. I wanted to be those men. I still can’t explain it to this day.

My next step was to try an espresso – a shot of espresso – and that was it. From that until now, only espresso blends have passed my lips, always consumed black with no milk and no sugar. Just pure coffee, pure espresso.

I am glad Italy is my coffee passion’s homeland because as I have since discovered in return visits, no other country on Earth can produce espresso coffee with such consistant quality, purity and flavour as the Italians!

By the late 1990s, home in Adelaide, Australia, I was depressed by the shoddy coffee making in most cafes and the nasty blends being sold by supermarkets and most gourmet stores.

So, in 1997, two close friends joined with me in a series of Tuesday Night Bezerks (sic). These fun evenings involved the three of us taking turns to each bring either a single variety of coffee bean to sample, a superb wine or a superb cheese.

The nights always began with a ceremonial ginding of coffee and extraction of three short blacks (or six, or nine) so that we could all taste this new variety of bean and score it. Yes, you read that correctly. We scored the coffee we tasted on:

This process was not only fun but after two years it gave me a comprehensive insight into the styles and flavours of bean that my palate preferred. I discovered that I definitely preferred …

To my palate, African beans, on the whole, offer more body, earthiness and chocolate, you might call these “base” notes, while South American beans tend to be sweeter and offer “higher” notes. I also am fond of some of the beans from India which ironically offer a spicier profile.

Many trials blends were created and played with through the early 2000s, before the last piece of the puzzle fell into place. A visit to my naturopath.

Towards the end of 2005, I visited my naturopath for a check up. To cut a long story short, her advice was to eat more protein and to achieve greater stability in blood sugar levels which, surprisingly, meant LESS CAFFEINE. Aparently, the way our body metabolizes caffeine creates the condiitions similar to eating wads of sugar.

This last suggestion stunned me because I was wedded to my dailiy routine of having three short black coffees.

While some people would call me an “addict”, I contend that my “addiction” to coffee was to its flavour and not to its caffeine. So that set the challenge. My naturopath was not demanding a 100 per cent reduction in coffee intake but rather in caffeine intake.

My challenge was to find a “decaf” that did not taste awful. As it turned out, I stumbled across some beans that were divine and could pass for full caffeine beans, even though they had been Swiss Water Method processed to remove their caffeine content. But, YOUCH, they were expensive, at least 2-3 times the price of “normal” coffee. That’s why you’ll find Baristador Coffee is not a cheap, commercial blend. There are no fillers, no cheap beanss – just top shelf beans, treated with respect, and created for drinkers who care about what they consume.

Another two years of further bean research and the reworking of my blends and now I have my Benchmark Blend series of pure, rich, smooth espresso coffee in four caffeine levels:

So where does this lieave us regarding the Baristador secrets? Well, it gives you the backgound and suggests where a lot of influence will be coming from within the Baristador Blends, and it should assure you that what you get in a Baristador package is a case of the best of both worlds – great tasting espresso coffee, less caffeine.

I know you and other afficionados might want more information than this. Sorry. I can hint that while Africa might be a dominant, I have worked South American influence into the blend, with at least five coffee-producing nations represented. Some other hints are:

So please enjoy Baristador Blends, and savour the fruits of one man’s burning passion for pure coffee.

Yours in the spirit of espresso