Am I addicted to caffeine? An insight from an alcoholic 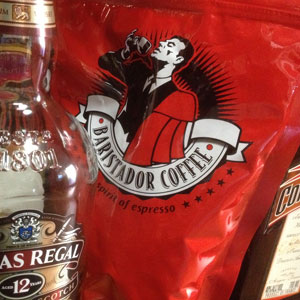 If you feel you are addicted to caffeine, can the Baristador range of reduced caffeine coffees help you cut down your intake?

A recent story shared by a self-declared alcoholic suggests the answer is yes.

[Note: I realise the chemical compounds in caffeine and alcohol are different, as are many other factors. This article is looking at one aspect of harnessing behavioural drives in a ‘weaning’ approach to reducing caffeine intake. I am not commenting on alcoholism itself. -Steve]

In a recent episode of Ardent Atheist podcast, comic, Brendon Burns, revealed how he suffered a relapse of his alcoholism last Christmas due to Brandy Butter.

He said it was late at night and he couldn’t resist the brandy butter in the fridge, left over from Christmas pudding.

He said he started gorging on the brandy-flavoured treat, which led to a major binge.

While there is actual brandy in brandy butter, Brendon said it was the flavour that triggered his episode.

Can flavour trick your addiction?

In reflecting on Brendon’s ordeal, it occurred to me that if alcoholic-flavoured food can lead people back to alcohol, then the flavour might be key to triggering our imaginations and actions, moreso than the drug compound itself.

This brings us back to the birth of Baristador Coffee.

I recall the moment the idea came to me. I was sitting with a health practitioner who was urging me to abstain from caffeine for a period of time and while my head was nodding, my heart was saying no because until the only decaf coffee I had tasted had been vulgar.

But after some research, and lots of trial and error, I developed some coffee blends that incorporated a quality ‘decaf’ element that tasted like real coffee.

The whole idea behind Baristador Coffee has been to make coffee blends of low caffeine good enough to fool our senses!

Brendon’s story, from an alcoholism perspective, seems to offer the proof in the pudding that flavour can trick our brain.

Therefore, if you have an entrenched coffee habit – the buying, the preparation, the drinking, the glorious, lingering aftertaste – Baristador Coffee’s graded range of 30% less caffeine, 70% less caffeine and even a natural decaf, could well be a pathway to weaning yourself off caffeine and maybe even coffee itself, without the shock of going cold turkey or drinking bad decaf.