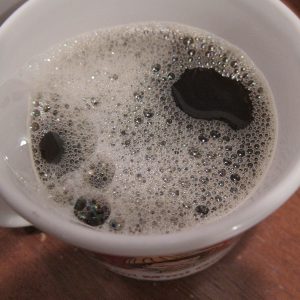 This is the first of seven guest blog posts about coffee. Baristador Coffee does not necessarily endorse the coffee making methods below, but does endorse Ms Parloa’s sentiments. Many thanks to Project Gutenberg for making this guest blogging series possible.

In war times, after a battle or a long march, how the soldiers enjoyed their coffee! And in many cases it was pretty poor coffee, too, though to them it seemed fit for the gods. The delicious aroma which arose made their feelings of weariness or depression vanish for a while, and the beverage itself cheered them in a marked degree. Nothing could take its place; nothing can take its place to-day. The consumption of coffee in this country is enormous. Rich and poor alike must have it. But it is a common complaint that a cup of good coffee is the exception rather than the rule. Considering the low price of the raw material, this should not be the case. People are prone to think that they know all there is to be known about coffee, and do not take pains to learn what special qualities different brands possess, and what the most approved modes of making coffee are.

Time was when a Mexican or South or Central American coffee was considered an inferior article. To-day some of the best coffees come from these places. For example, one of the most delicious coffees which is brought into this country comes from Guatemala. It bears the name of “Las Nubes” (The Clouds), which it takes from the plantation where it is grown. There is an odd bit of history connected with this plantation. A Scotchman named Nelson owned it, and was coining money from it, when he was banished from the country by President Barrios, and his property was confiscated. It is now owned by the widow of Barrios. The annual yield from it is four hundred and fifty thousand pounds. A large proportion of this goes to England, where it brings a higher price than here.

There are two kinds of coffee,—the strong and the mild. To the first class belong the Rio and Santas, and to the second, the Java, Mocha, Maracaibo, and, indeed, almost all the other kinds. When a rich, smooth beverage is desired, a combination of Mocha and Java—or some coffee that has the qualities of Java—should be used; but when a very strong flavor is liked, Rio or Santas should be taken. The supply of Java meets only about one-fifth of the demand. For this reason many other mild coffees are sold under the name of “Java.” Good Maracaibo is equal to Java, and is constantly sold under that name. A combination of one pound Mocha, one pound Rio, and two pounds Java or Maracaibo will give a rich, strong-flavored drink, but not so smooth as if the Rio were omitted.

When buying the berry, pause for a moment to think how you like your beverage. Do you want it smooth and of delicate flavor? Take one-third Mocha and the rest Java or Maracaibo. Do you want it strong? Use all Rio, or temper that brand by combining it with some one of the mild kinds.

A large proportion of housekeepers buy their coffee roasted, and many also buy it ground. If coffee, while still hot from the roaster, were put into vessels almost air tight, and kept in them until ground for use, the improvement in the drink made from it would amply repay for the trouble taken. Much of the fine aroma is lost before the roasted bean reaches the housekeeper, and there is even a greater loss if the coffee has been ground for a considerable time. These are some of the disadvantages which must be endured when one buys coffee already roasted. But, on the other hand, unless the roasting be done very carefully, the coffee will not be good. A few burnt beans in a quart will ruin the drink. When careful attention to roasting cannot be given at home, it will be better to buy a supply already roasted, but never ground. A French small mill, which can be regulated to grind coarse or fine, can be bought for about a dollar and a half. With care it will last for ten or twenty years. Some firms put up coffee in tin cans. It costs more, but retains so much of the aroma as to be well worth the extra price.

When green coffee is bought, be careful that it is well seasoned. It should have a brownish or yellowish tint, which comes only with years of seasoning. The best way to do, when it is possible, is to buy green coffee by the sack, and keep it stored in a sweet, dry place—say the attic—for two or three years. In that time it will have become sufficiently mellowed.

To roast coffee, put the green beans into a large dripping-pan, being sure that the pan is perfectly clean. Have the coffee about an inch deep. Place the pan in a moderate oven. Stir frequently, and at the end of half an hour increase the heat of the oven. From this time until the beans are sufficiently browned, there should be a stirring every three or four minutes. When the coffee is almost a chestnut color, remove the pan from the oven, and for every quart add one tablespoonful of butter. Stir well; and, while the coffee is still hot, put it into cans and cover closely. Coffee absorbs moisture and odors. It should therefore be kept in a sweet, dry place.

There are so many ways of making coffee, and so many kinds of coffee-pots, that young housekeepers often are perplexed in choosing either a mode of preparing the drink or a utensil in which to make it. If a few principles be carefully observed, a perfect result may be counted as a certainty—provided, of course, that the ground coffee be good. The berries should be heated before or after grinding. The coffee-pot should be entirely clean, without a particle of old coffee grounds in it. The coffee should not be subjected to long boiling, as this will dissipate the aroma and produce a rather bitter drink. Coffee that is not boiled at all is very smooth and free of bitter flavor. All coffee should be served hot, and as soon as possible after being made. Always serve cream or hot milk with it. Heat the milk to the boiling point, but do not let it boil.

Tastes vary as to the proper strength of coffee. The rules given in this article are for a strong drink; and where only moderate strength is desired, use but half the quantity of dry coffee for the quantity of water stated. Coffee made with cold water always is stronger than that made with boiling water, and in the opinion of many people it is better; but some folks think that no coffee is equal to that which has been boiled with an egg. No matter what mode of making the drink is followed, the result will be pleasing if good material is used, the work done quickly, and the coffee served fresh and hot.

Here are four rules, any one of which will give perfect coffee, but each of a different flavor:—

Filtered Coffee Made with Cold Water.

Put one cupful of fine-ground coffee in a small saucepan and on the fire. Stir constantly until hot. Put the hot coffee in the filter of a coffee-biggin. Place the coarse strainer on top, and then add half a cupful of cold water, pouring it in by tablespoonfuls. Cover it and let it stand for half an hour, though less time will do. Next add three cupfuls and a half of cold water, a cupful at a time. When all the water has passed through the filter, pour it from the pot, and again through the filter. Cover closely; and at serving-time heat it to the boiling point and serve at once.

One advantage in using cold filtered water is that the coffee may be made at any time in the day, and heated when required. If to be served after dinner, it will be better if made with three cupfuls of water instead of four.

This coffee will be perfectly clear, and of a fine color. The flavor will be rich, smooth and delightful.

Filtered Coffee Made with Boiling Water.

Heat one cupful of fine-ground coffee in the manner described in the preceding receipt, and put it in the filter of the coffee-biggin. Put the biggin in a pan with a little boiling water, and place it on the stove. Pour a gill of boiling water on the coffee, cover, and let it stand for five minutes. At the end of that time add half a pint of boiling water, and continue to add boiling water by the half-pint, at intervals of three minutes, until a quart of water has been used in all. Serve the coffee at once.[10] Or, the coffee may be passed through the filter a second time, giving a stronger cup.

Filtered coffee never should be boiled. Placing the pot in the pan of boiling water keeps the coffee at the boiling point, and yet protects it from a boiling.

Boiled Coffee Made with Cold Water.

Heat a cupful of coffee, ground rather coarse, and put it in a bowl with one pint of cold water. Cover closely, and let it soak for an hour or more.

Break an egg into the bowl with the coffee, and stir well. Put this mixture into the coffee-pot and place on the fire. Heat slowly to the boiling point, then add a pint of boiling water, and boil gently for five minutes. Now add a gill of cold water, and set the pot back where its contents cannot boil. At the end of three minutes strain into a hot pot and serve at once.

This coffee will be stronger than that made with boiling water; its flavor, too, will be somewhat different.

Boiled Coffee Made with Boiling Water.

Heat one cupful of coffee, ground rather coarse. Put it into a coffee-pot, and add an egg. Stir well, and add a quart of boiling water. Place over the fire, and stir until the coffee boils up. Now stir the coffee and egg down, and then shut down the cover, and set the pot where its contents will only simmer during the next five minutes. At the end of that time add a gill of cold water. Let the coffee stand at the side of the stove for three or four minutes, then strain into a hot pot, and serve at once.

The rules for making coffee might be multiplied almost indefinitely, but what has been given here will insure a good beverage every time.

Image: Bad Coffee by Rich Moore via Flickr. CC BY 2.0